Do you sometimes know what to do with your money but still don’t take action on that knowledge? A recent financial coaching discussion reinforced the influence of the “knowing – doing” gap. It also helped illustrate how the gap between our financial knowledge and actual money-related behaviors can sidetrack progress towards important life goals.

Here was the situation. Maria is a recently divorced mother of two who was struggling to balance making payments on her student loans, car loan and credit card bills with a desire to begin saving for unexpected expenses and most importantly to her – retirement. She knew that despite the fact she still had enough income to meet her family’s basic needs, there wasn’t much breathing room and something needed to change. Maria used spending tracker tools like Mint.com in the past and she understood that an emergency fund would help her break the cycle of living paycheck to paycheck. She also understood how important setting aside money for retirement and her children’s future education costs are during this season of life. 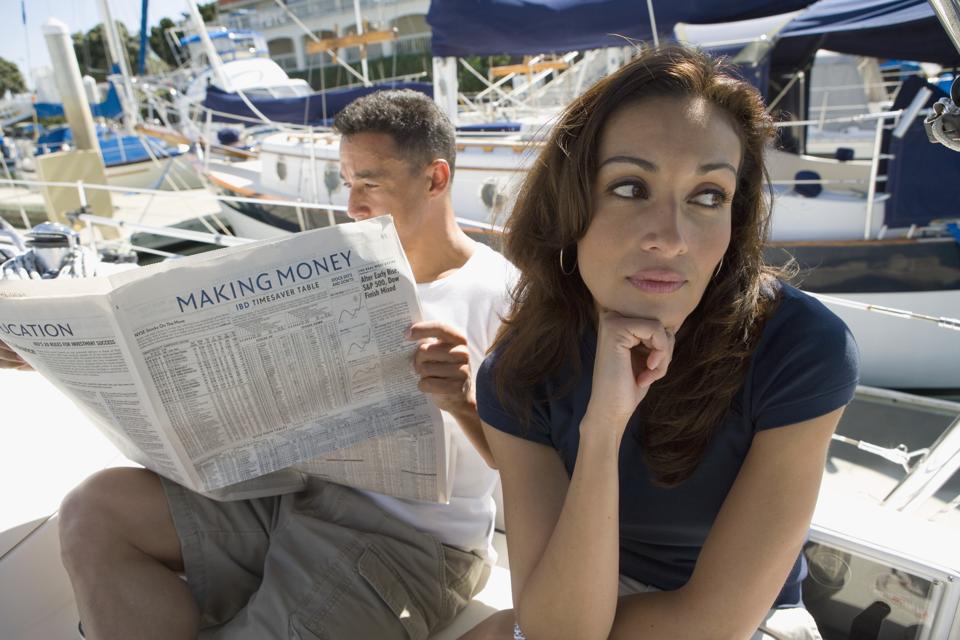 Maria’s biggest obstacle wasn’t knowledge. It was avoidance. Money arguments are often linked to divorce and her prior marriage seemed like a constant wave of disagreements about how to best manage their finances. Avoiding money matters became her coping mechanism of choice. As a result, she put her credit card payments on auto-pay and didn’t really know how much debt she had accumulated since the divorce was final.

In general, money avoiders tend to view money as negative and a source of fear, anxiety, or possibly even disgust. Money avoiders often have beliefs that wealthy individuals are greedy. They also tend to develop thoughts that they don’t deserve money or that money is bad (and quite possibly the root of all evil) so it’s not okay to accumulate more wealth during your lifetime than you will actually need. Money avoiders may experience conflicting beliefs that having more money and wealth could improve their life satisfaction, self-worth, and social status. This belief system can create a tug-of-war between feelings of contempt toward money and wealthy individuals to placing too much emphasis and value on the role of money during their life journey.

Money avoidance can involve both “doing” and “not doing” things. Not surprisingly, money avoiders have difficulty organizing financial statements and frequently struggle discussing money matters. It may seem like a no-brainer suggestion to simply get organized, but money avoiders are pretty darn good at…well…avoiding!

This financial coaching scenario isn’t unique. Money avoidance is a common obstacle on the path to attaining an authentic sense of financial wellness. If you have a history of the following you may be a money avoider:

Financial denial. This occurs when we tend to minimize our money problems or try to avoid thinking about financial matters altogether rather than accept and deal with our financial realities. People with issues related to financial denial have trouble opening bank or credit card statements. They don’t see the need for a financial plan. Money avoiders also struggle to communicate with their partner about money and have a tendency to avoid savings or building wealth. Their avoidance behaviors frequently lead to late fees, overdraft charges, and accumulating significant debt.

Financial rejection. Have you ever known anyone who appeared to feel guilty about having money? People who reject money, another sub-group of money avoiders, often feel that they do not deserve good things in life. Accumulating money is viewed as an undeserved gift. This is a common money-related problem that some people experience after inheriting large sums of money. Some potential signs that money avoiders have issues related to rejection of money include behaviors such as rapidly spending an inheritance, avoiding the acquisition of wealth, or taking an unconscious vow of poverty.

Difficulty spending money. Living within your means and spending less than you make is considered a best-practice behavior. At the extremes, this can become a potentially self-destructive financial behavior. These spending difficulties common among money avoiders are often based on seemingly irrational feelings of fear or anxiety. They may also be accompanied by self-sacrificing tendencies and a sense of guilt whenever they spend money.

Excessive risk-avoidance.  Some people would rather do nothing than lose anything. Risk avoidance may come in the form of how people choose to invest. Risk avoiders tend to focus on things such as market risk rather than why they are investing in the first place.

Let’s go back to the original financial coaching scenario. Maria acknowledged having a long history of trying to avoid money. Ignoring bank account and credit card statements and refusing to open statements from her 401(k) provider were just some of the symptoms. Maria was essentially sabotaging her financial success. Here are some steps Maria started taking to move into the direction of meaningful change.

1. Start talking about money and life. (Reframe how you think about money.) Maria was encouraged to think about her own money story and the experiences that helped shape her beliefs about money. She also started identifying ways to challenge money scripts that were supporting her avoidance of money matters.

2. Make a list of “SMART” life goals. In order to get Maria focused on her financial plans, the core focus of her coaching discussions centered around her life. She dedicated time in between her roles as mom and employee to establish meaningful goals that were Specific, Measurable, Achievable, Relevant, and Time-Bound. This helped her prioritize the things that mattered the most and filter out some of the noise and distractions.

3. Express gratitude. Maria began a gratitude journal and committed to writing down 3-5 things she was grateful for each day. Shifting her attention to the “gifts” that she was grateful for in life provided a new sense of appreciation of what was good about the world and her life. This was a refreshing alternative to focusing on what was wrong in her financial life.

4. Commit to daily check-ins and weekly check-ups. (Start small.) Reversing over a decade of financial avoidance doesn’t just change with the flip of the switch. Maria decided to use her bank’s spending tracker app to monitor where her money was going. After breaking through the fear of the unknown, she dedicated 45 minutes to reviewing where her money went over the last 3 months.

The next day, she used this information to begin setting some spending limits for the next 2 weeks. She set an alert on her phone to remind her to log into her online banking app at the same time each day during her lunch break. This helped her increase the overall awareness of her financial situation and made her weekly spending plan reviews easier to stick with.

5. Focus on the quick wins first. The last thing money avoiders like Maria want to worry about is a list of 20 things to do to take control of their financial life. That would be too overwhelming. Instead, she was encouraged to take small steps such as checking her credit report, logging into her retirement account and gathering her credit card statements. Small wins helped her build up the courage to start finding solutions to her lack of financial wellness.

6. Seek out professional guidance and social support. Maria had already started to seek out the financial wellness coaching services offered by her company as an employee benefit. Her financial wellness plan also included self-care for emotional well-being to help her deal with the aftermath of divorce. Maria is still working to build her social support network and gradually feels more comfortable talking about her finances in a proactive manner.

The best news is that Maria is no longer a money avoider. She is now turning knowledge and awareness into an actionable plan that will continue to improve her sense of financial wellness. What step(s) will you or the money avoider in your life take?

This article was written by Scott Spann from Forbes and was legally licensed by AdvisorStream through the NewsCred publisher network.