Improving the Quality of Your Life 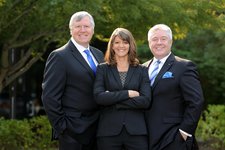 Yesterday the Dow crossed the 25,000 mark for the first time in history. Wall Street partied like it was 1999.

I have to confess that it’s both fun and scary at the same time. 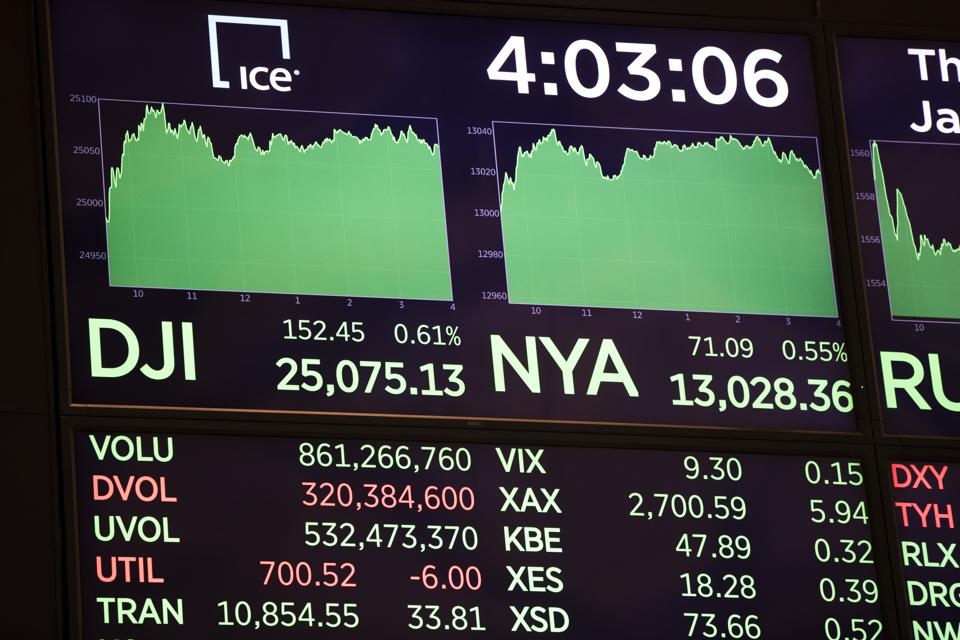 NEW YORK, NY – JANUARY 04: The day’s final numbers are shown on a monitor on the floor of the New York Stock Exchange (NYSE), January 4, 2018 in New York City. The Dow closed above 25,000 for the first time ever on Thursday. (Photo by Drew Angerer/Getty Images)

It’s fun because every time I hit refresh on my favorite investment tracking software, the value of my investments jump. It’s scary for the exact same reason. How long can this last? The hangover could be ugly.

So I thought I’d reflect on Dow 25,000 and what it means (or doesn’t mean) for passive, by and hold investors.

We can be superstitious about numbers. We have lucky number seven, unlucky number 13, and now Dow 25,000.

We all know this. We know that we can’t predict what the market will do tomorrow, let alone over the next few months or year.

Yet deep down in our souls we worry. After a 9-year bull market, surely the shoe is about to drop. Interest rates must go up. Asset values must go down.

Well maybe not. While it’s true the current bull market is long, it’s not the longest. That honor goes to the bull run started in the late 1980s and ending when the tech bubble popped.

James Stewart at the NY Times wrote a great piece on the six longest bull markets. While the current run is 3,222 days long with a 301% gain, the tech bubble ended a bull run that lasted 4,494 days and clocked a 582% gain.

Surely the bull market won’t continue for a 10th year. 11th. 12th. Well maybe it will. Maybe not. That’s the point. We don’t know. More importantly, we should invest as if we do.

Following Your Feelings, Like Chit Chat, Is Gonna Get Ya Hurt

In 2010 I was convinced that interest rates would go up that year. The good news is that I know I’m terrible at predicting markets. Actually, I’m not so good at predicting much of anything. Knowing this, I didn’t invest based on my predictions.

Unfortunately, many have lost out on the latest bull market because they followed their gut. Akane Otani and Chris Dieterich of the WSJ report that many individual investors have missed the bull market over the last five years.

Nearly $1 trillion has been pulled from retail-investor mutual funds that target U.S. stocks since the start of 2012, according to EPFR Global, a fund-tracking firm. Over that same period through Wednesday, the S&P 500 soared 116% and, along with the Dow Industrials and Nasdaq Composite Index, rose to 190 all-time highs.

Nearly $1 trillion! As the article mentioned, some of this money found its way back into the stock market in various forms. But cash has been leaving equity funds for several years.

Emotionally, it makes sense. We still remember the pain of 2007 and 2008. The economic recovery has not exactly been one for the ages. And the market run can’t last forever. The music will stop eventually.

But that’s just the point. It will stop, but we have no idea when. We shouldn’t invest as if we do.

The Experts Are No Better

I’m looking forward to the day when CNBC interviews some expert and the interview goes like this:

CNBC: “So tell us where you believe the market is headed.”

CNBC: “Well surely you can give us some insight here. What are the chances the market will be down this year?”

I’m guessing that expert wouldn’t be invited back anytime soon (Note to CNBC: If you are looking for somebody to say he doesn’t have a clue about where the market is headed, I’m your guy.)

And for those “experts” who love telling us where the market is going, here’s how the interview should go:

CNBC: “So tell us where you believe the market is headed.”

Expert: “The market still has room to run. I think we’ll be up at least 10% this year as interest rates hold relatively steady.”

CNBC: “And how much of your own money have you put at risk based on your prediction?”

Here’s an example. Today CNBC reported on an expert’s predictions–Investors should be ‘terrified’ about the ‘exponential’ risk associated with Dow 25,000, analyst says.

In the article we learn that Paul Gambles, managing partner at MBMG Group, is “terrified” of the market as the Dow crossed 25,000. Terrified? Really? Gambles told CNBC that traders should avoid investing in stocks. The article doesn’t report what investors should invest in. Bonds?

The key here is not that I believe markets will continue to go up. Rather, it’s that we shouldn’t assume they will go down just because they are high or have been going up. We don’t know where the market is headed.

What Should We Do?

There’s a saying in the field of economics about predictions:  Predict what or when, but never both.

In investing, knowing what or when, but not both, does us no good.

But we don’t know when.

So for long-term, buy and hold investors, we have just one reasonable choice–stay the course.

It’s times like these that make the creation of an asset allocation plan with your advisor so important. Write it down. Follow it. Rebalance periodically. Shift your allocation on a set schedule as you near retirement.

And stop listening to predictions.

This article was written by Rob Berger from Forbes and was legally licensed by AdvisorStream through the NewsCred publisher network.

Improving the Quality of Your Life