Record Crack Spreads, $9.77 A Gallon Gas And Why Pump Prices Seem To Go Up Faster Than They Go Down

The most expensive gasoline in the United States can be found at the Chevron station in Mendocino, California, where a gallon of regular unleaded will set you back $9.46, and it would cost $289 to fill up your Ford F-150. Premium costs $9.77 per gallon. Nationwide, average prices are at a record $4.86, with California at $6.34 per gallon and New York City more than $5, according to AAA.

The big culprit of course is the soaring price of crude oil, up $16 a barrel in the last month to $119, for benchmark West Texas Intermediate. But the oil price alone doesn't explain doesn’t explain why gas is so much more expensive now than it was in March when crude oil first spiked higher than $130 per barrel following Russia’s invasion of Ukraine.

Basic supply and demand is an important factor. Developed world inventories are now at seven-year lows of 2.6 billion barrels of oil and petroleum products, 300 million below the five-year average. Gas inventories in the U.S. have sunk from 246 million barrels at the end of February to 219 million barrels last week, according to the Energy Information Administration. With refineries and oil companies pumping at maximum capacity, there's precious little supply cushion to meet rampant demand for fuels, paired with the loss of millions of barrels per day of Russian supplies due to sanctions.

According to the Dallas Federal Reserve, only 1% of gas stations in America are owned by companies that also produce oil, and to acquire their wholesale supply they’re at the mercy of refineries, the intermediary between crude oil pulled from the ground and refined gasoline that can actually be pumped into cars. Crude oil accounted for 59% of the price of regular gasoline in March 2022, but 18% was refining costs, and this fraction grows when there are regional disruptions. Pricing can be hyperlocal. When a California refinery shut down for power outages in March, it led to higher prices in California and Arizona despite prices falling in much of the country as crude oil retreated.

“Theoretically you could have oil be $1 a barrel and gas could be $10 a gallon if there's only one tiny refinery in the country operating,” says Patrick de Haan, head of petroleum analysis at GasBuddy. “Oil is not at what it was in March when it hit $135, but what has changed is that gasoline inventories have continued to decline.” 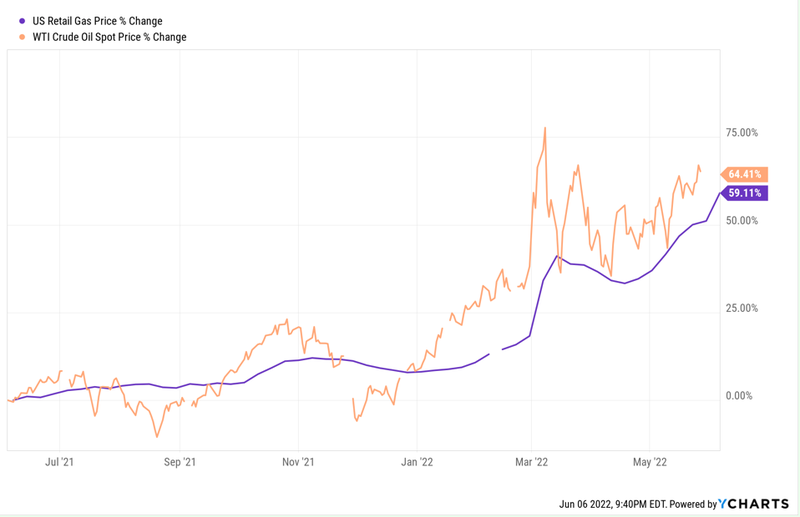 It’s normal for inventories to decline in the spring and summer months as more people hit the road, but refiners are charging higher premiums with no additional supply coming from Russia. Indeed, business is great for America's refiners, who measure their gross profitability using a metric known as the "crack spread" which is simply the difference between what it costs them to buy a barrel of crude oil and the premium they can charge for the mix of jet fuel, diesel and gasoline that their plants "crack" the crude hydrocarbon molecules into. At midwestern refiner HF Sinclair (the refiner formed by the recent merger of HollyFrontier with Sinclair Refining, owned by the billionaire Holding family), crack spreads roughly doubled from the first quarter to the second, to nearly $50 per barrel processed. In April, refiners saw their profit jump by 50% to about $1 per gallon of gasoline sold.

Retail gas stations pass through these higher prices to customers, and they often have little competitive incentive to lower prices too fast even if oil falls. The Dallas Fed cites the conventional wisdom that gas prices go up like a rocket and down like a feather.

“When the price of gasoline goes up, people are very good about going out and trying to find another gas station which is perhaps not quite as expensive,” says Lutz Kilian, senior economic policy advisor at the Dallas Fed. “If you look at price declines, there's evidence that people are not going out quite as much to look for an even less expensive gas station, and that gives additional market power to retail gas stations.”

Another factor giving retail gas operators pause before lowering prices is the scale of the energy market’s volatility this year. The uncertainty caused by Russia’s invasion and sanctions against Putin’s regime have caused a roller coaster. Gasoline retailers need to hedge against that volatility, and many are still recapturing margins when they were slow to react to the initial March surge.

“We've literally seen a couple of days where the wholesale price of diesel goes up by 75 cents a gallon in one fell swoop,” De Haan says. “If you're selling thousands of gallons a day, that's a huge amount of exposure. Stations are going to be reluctant to immediately lower prices 20 cents when they just lost 75 cents times 3,000 gallons in a day.”

In the long-term over monthly or quarterly periods, these behavioral disruptions tend to fade in significance as crude oil prices steer the market. But with experts musing that $200 per barrel might be on the horizon barring a deep recession, that prospect isn’t so appetizing either.

If you think that refiners and gas stations are making too much money right now, why not buy shares in one? Credit Suisse analyst Manav Gupta expects U.S. refiners Valero Energy and Marathon Petroleum to report record second-quarter profits. Both stocks are still trading at around 11 times expected 2022 earnings despite already gaining more than 65% this year. But beware, high prices eventually solve themselves, and the longer this goes on, the more traction Congress might receive for a polarizing proposed windfall profits tax that would eat away at these gains.